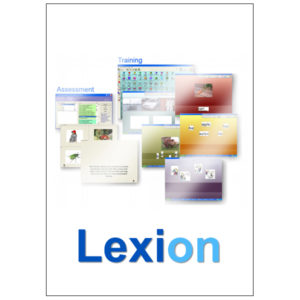 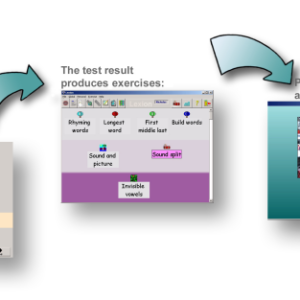 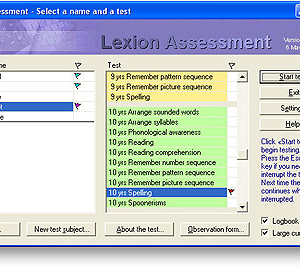 Lexion analyses students difficulties (including dyslexia, language related learning disorders, and aphasia)
It then automatically prescribes the resources needed! The programme includes one full version of Lexion PLUS two mini versions. Even better – the price is one-off, meaning there are NO ongoing renewal costs!

Lexion is designed for SLTs, RTLBs or specialist teachers.

Lexion makes it easy to assess pupils who are struggling

Lexion makes it easy to assess pupils who are struggling with reading and writing. Simply select a test for their age and area of difficulty – Lexion will analyse the result, displaying the results in charts and text. Lexion then automatically creates exercises to address the difficulty. The pupil can practice the exercises either at school or at home, and as they improve, they can be re-tested to assess progress. The exercises cover the most fundamental processes in learning reading and writing, including:

Lexion was developed by speech therapists and is designed to provide pupils with structured training in basic cognitive English language processes before and during the acquisition of reading and writing skills.

This test assesses the ability to focus on the formal side of language. It involves manipulating elements at the word, syllable, and sound levels, without seeing any text in writing. Elements will be added, removed, or exchanged. Examples:

Spoonerisms replaces Phonological awareness as the principal test from the age of 10. The latter was found too easy for this age even if the test items were made more difficult. To create a more demanding challenge for these pupils, the test Spoonerisms was constructed, which also tests phonological ability. Word parts are manipulated. The target words are compound words. The test subject will hear, for example, colicepar, and should find out the real word policecar by letting the k and p sounds change places. Such operations put high demands on phonological ability. The challenge is even greater if the false word parts in turn are real words, e.g., wallhay is more tricky than ningerfail.

Before testing, it is important that the test subject gets a hands-on instruction about the principles of the test. Empty paper labels are used, serving as markers for the word parts. With bootfall/football as an example, two wide labels for oot and all are made, then two narrower ones for b and f. With these labels the principals of spoonerisms are explained to the test subject prior to testing.

You will hear a sequence of sounds that make up a word. On the screen there are white labels. If you click on a label you will hear a sound. You should build a word with the labels. This test examines the child’s ability to identify phonemes in a phoneme sequence, and to blend these into a word. The child should say the word, and then build the words on the screen with white labels, each corresponding to a phoneme. This puts demands on synthesis at a phonological-phonemic level of awareness. The ability to segment and blend is based on active segmentation, which is essential in reading and writing.

You will hear a sequence of sounds and you should say what word they make up. Then you will see pictures and you should point to the picture that best fits the word that you have come up with. This test is used when the child does not manage to say the words of the test Arrange sounded words after presentation of the phonemic sequence, or if the child does not manage to build the word with the labels. In this test the child gets guidance through the support of pictures.

The test works as Arrange sounded words where the stimulus word is segmented into sounds, but here the child is asked to build words with letters. The child does not have to segment the words, but only make a synthesis of the word, and relate that synthesis to letters. Some children tend to use letters as a support without being enough phonologically aware. This may help for simple words, but is not sufficient for words with complex or irregular spelling. By comparing the results of these two tests, children can be found who use this deceptive strategy.

This test in turn works as the previous one but now the words are spoken normally. With this test, we wish to test the child’s ability to build words with letters. The child will hear the word as a whole word, and needs to be able to segment the word in order to build the word with the letter labels. Those who master the test Arrange sounded words, show that the phonological-phonemic awareness is working and also demonstrates that it manages to blend phonemes into words and to segment words from its own blending. This indicates that the child has a functioning short-term memory on this level. But what will happen if we engage letters? Many experts claim, that the first steps into phonological based letter managing starts by writing. The child’s phonological-phonemic analysis of words evolves through the child’s own production of consecutive letters. It may then be noticed, that children often mix letter names and sounds when writing.

The test has two series. In the first one you build a word from a number of syllables represented by empty labels that sound when you click on them. In the second series there will be superfluous labels that sound almost as the correct ones. Both series test the phonological ability; the latter also tests discrimination. The test reveals the ability to segment words into syllables and to rearrange syllables into a word. The distracting labels of the second series contain syllables similar in vowel quality or other distinctive features. A test person with a weak phonological ability may repeat the word correctly but still be unable to find the right pieces. The phonological ‘effort’ may also tire the test person as the test is progressing.

The purpose is to test the child’s reading, or decoding, capability. The child will hear a word, and has to match it with the corresponding word written on the screen. There are four types of presentations.

When testing Reading at this age, there are texts with jumbled letters inside the word (the first and last letter being intact). These texts are surprisingly easy to read, but due to the disordered letters the reader is forced to use phonological decoding, or perhaps make a comparison with a possible whole-word representation that already exists in the reader’s mind.

To interpret an examination of a child’s comprehension of text requires consideration of several elements that are involved when a text is understood. The child must have attained a certain level of automatized decoding, which means that attention can be set free in favour of interpretation of the meaning of words, i.e. demands are put on vocabulary. The child should also possess necessary grammatical ability to interpret the words that are chosen, and how the words have different meaning according to inflection, etc. In the comprehension tasks we test the basic competence in decoding and comprehension of:

The child has to write from dictation. It will hear a whole word, and needs segment it into sounds, and then find letters on the keyboard corresponding to the sounds of the word. The complexity of the words gradually increases.

The tests for 10-16 years have more difficult tasks, especially towards the end. Some have irregular spelling, some are nonsense words. Some words have swapped sounds and must intentionally be written with swapped spelling; the purpose is to decide if the test subject manages to analyse the word phonologically although there is a swap in it, and reproduce the word without being distracted by the picture shown on the screen.

A problem with the short-term memory may manifest itself, among other things, in difficulties remembering a phoneme sequence when reading and writing, or remembering a sentence that has been decoded, where the memory of the first words disappears concurrently with the decoding of the final words in the sentence.

The purpose of Remember picture sequence is to measure the child’s ability to keep a series of nouns in the short-term memory. Lex Testor will say a few words, and the words that are presented as pictures on the screen, and should be arranged in the same order as they were spoken. Remember number sequence is a memory test that implies a lesser amount of semantic support. The child has to memorize a series of numbers. After every other test item the number of figures to be memorized increase. Remember pattern sequence examines the child’s visual memory and contains as little semantic information as possible. The pictures show formations of semi-circles that in combination with each other create patterns that the child should remember. These three tests detect the ability to handle elements by means of different memory strategies. These strategies are needed in segmentation and synthesis of the sound elements of a word, the word elements of a sentence, as well as the sentence elements of a story.